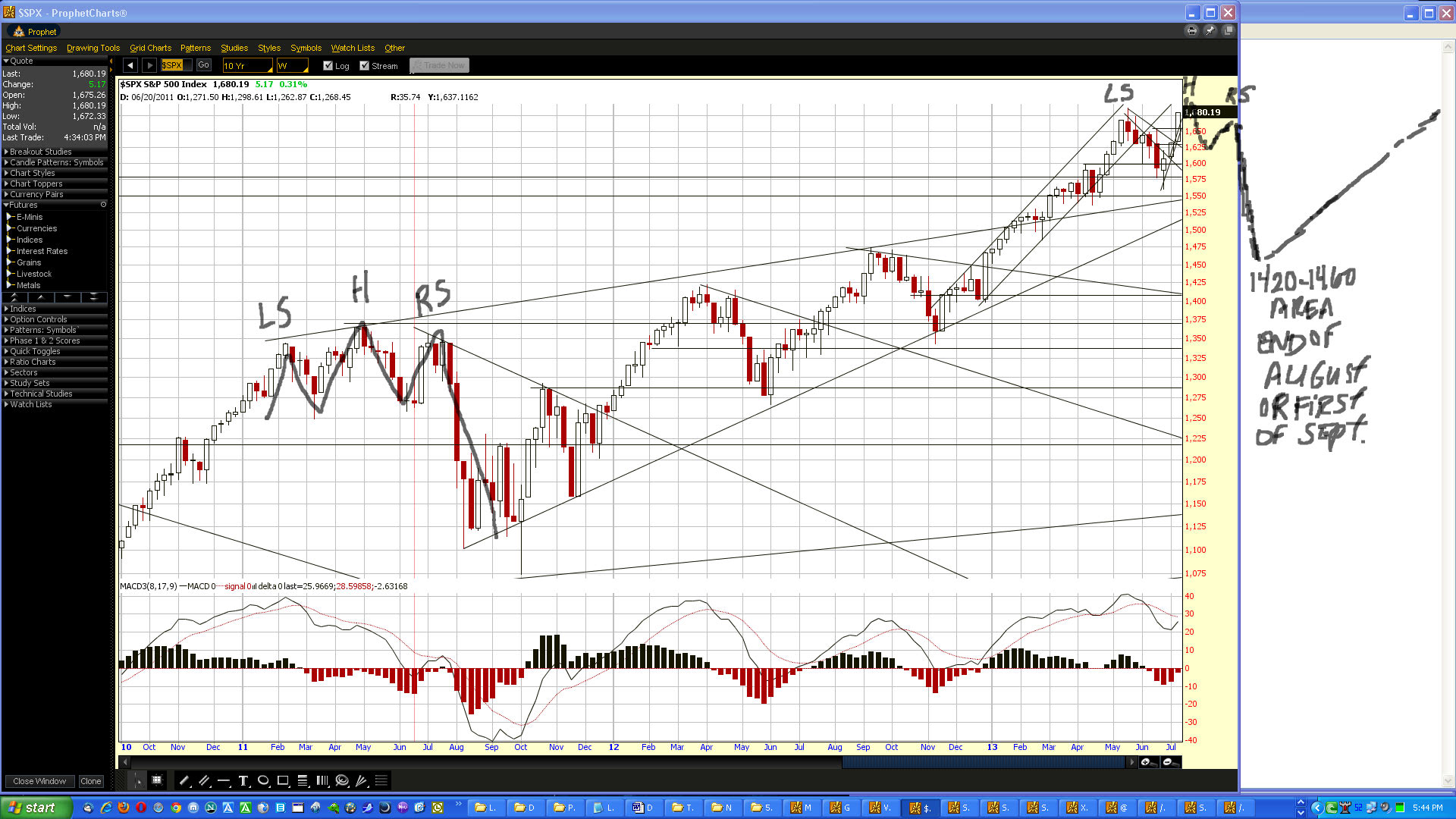 Expect a nasty wave 3 down in August!

From the looks of things I think we are going to create a nice "head and shoulders" pattern in the coming few weeks... of which the May 22nd high of 1687 is going to be the left shoulder while the coming new high will be the head.  This new high I'm expecting should be around 1705-1710 spx and could hit this coming week.  We have option expiration on Friday and usually by Wednesday most traders have exited their positions which means that not much happens on Thursday and Friday.  Will it be the same this go around?  I don't know?  But I will say that any weakness we have early in the week will likely be bought up later in the week.

Since the move up last week from Bernanke saving the world was probably some smaller scale wave 3 it would stand to reason (not that "reason" ever works with the gangsters) that we could see a small pullback Monday or Tuesday for a possible wave 4... which then leaves only the wave 5 up to complete this larger move from the 1560 low.  My target is around 1705-1710 and if I had to pick a day for it to hit I'd go with this Thursday because it's another "eleven" day.  Do remember that this code can change anytime as the more people notice it the more likely they will be forced to change it.  After all, if everyone knew the date of the high the gangsters couldn't steal your money.  They need you to take other side of the trade that they are on, and if the sheep go short with the wolves it won't work.

Therefore they have to make this market look like it's going to 1800 or more so you'll be long when they are trying to get short.  We should look for all kinds of bullish propaganda on the main stream media as you all know those people are paid to mislead you.  The more they talk up the economy the more sheep they suck into the long side.  Naturally they will be getting short while you are long, and of course they can (and will) do everything possible to make you believe that "this time is different" and the world economy is saved.  Bullshit, but it is what it is...

Put simply I'm looking for that new high this week after a small pullback (or sideways movement) early in the week.  If we don't see it Thursday then I'd look to the following Monday but a new high is surely coming... and very soon!  Once the target is hit I'm expecting a drop of 50-80 points for the first wave 1 down, and then a strong wave 2 up that should end in the first week of August.  I'd have to guess that August the 8th would be the high but that's simply based on numerology, as that's another "eleven" day.  It works out nicely for the time needed to make the wave 1 down and the wave 2 up but the date is just a guess and nothing more. 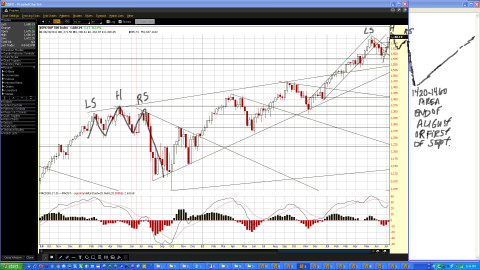 So assuming we do top for the wave 2 up into the first week of August I'd expect the move up to come up shy of the 1687 high, (which is the left shoulder in the making), as if this is to make a right shoulder I believe it will be lower then the left shoulder and certainly lower then the head that should hit this week.  This is forward looking and hasn't happened yet of course but if I were to think like a gangster I'd certainly make that wave 2 up a strong one.  You want as many bears out of the market as possible before the start the nasty wave 3 (or C wave?) down to the target low area of 1440 spx.  This area is based on the opening level for 2013 on January 2nd as I believe strongly that it will be revisited.

That day had the spx at 1420-1460... a strong 40 point rally to start the new year off.  So I picked the middle of that range but obviously it could only go to 1460 or lower to 1420, which means we will have to be flexible in exiting our shorts when this happens.  We also have further conformation that this area is the coming crash low as someone (thanks Rose for the update) on another site seen a FP on the SPY of 147... which is about 1465-1470 spx.  We know from past history that FP's are commonly pierced by momentum before they reverse so it's entirely possible that we go deeper into the 1420-1460 zone before bottoming.

This move down should be ugly for the bulls and look like 2008 if it falls like I expect it to0!

Consider the possible high of the right shoulder around 1680 spx (again, just guessing here), which comes in the first week of August.  Now look at the 2008 weekly chart and you'll see it only took 3 weeks to fall from 1255 spx (the week of 9/22) to 839 spx (the week of 10/6), so it's entirely possible that this move down could be completed by the end of August.  However, unlike 2008 (which looks like a 5 wave pattern to me) I believe this whole move down from the coming new high will be a 3 wave pattern, or an ABC move.  The key will be to figure out the top of the right shoulder in the first week of August... which will likely end up being a B wave up and not a wave 2 up. 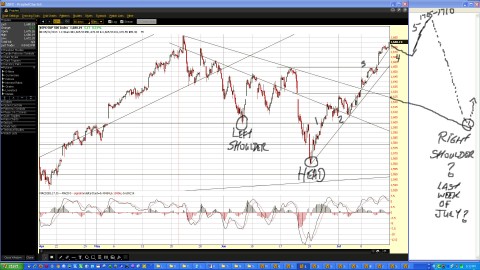 Look at the January to August "head and shoulders" pattern that formed in 2011 as that's what I'm expecting again.  In that case they put in the top of the left shoulder at 1344 the week of 2/14, then the head at 1370 the week of 5/2... followed by a slightly higher high (then the left shoulder) the week of 7/5 at 1356 spx.  If this pattern happens again then the high we see for the coming right shoulder (in the projected first week of August, 2013) could be higher then the 1687 left shoulder high on May 22nd (which would certainly trick the bears again).  Again, trying to figure out the top of this right shoulder that I think will hit in early August is tough as we don't yet know the top of the head... but it should be coming soon.

Until then let's just not take any short positions for more then a day trade as I suspect they will make the first wave down and the wave back up (into early August) filled with tricky moves.  As far as the first wave down is concerned I'm guessing that it will backtest the falling trendline that connects the May 22nd high of 1687 to the June 18th high of 1653... which is around 1625 currently, but obviously it will continue to fall lower as each day passes.  If it drops to 1600 by the last week of July then it will make a right shoulder on an "inverted head and shoulders" pattern with the 1560 low being the head and the 1598 low on 6/6 making the left shoulder.

This should be a nice tricky pattern to fool the sheep who see it and assume that the rally up from the right shoulder low will take out the coming high of 1705-1710... but we all know that's likely a distraction by the gangsters to lure in the longs before they tank it hard starting early August.  The market is full of misdirection as in order for the gangsters to steal your money they have to have you on the other side of their trade.  So I'm fully expecting this "inverted head and shoulders" pattern to make all the bears scared to get short and the bulls licking their chops anticipating another breakout move to the upside.

Ok, that's all for now... just focus on the first week of August (if you are a bear?) as the whole month is setting up to be a "Bear Feast"!